Here in Kentucky where Periphio systems are built, there’s a saying that goes something like, ‘There’s a million ways to skin a cat’, implying there are a lot of different ways to do something. Building a gaming computer, and choosing the components that go inside, is certainly no exception to this age-old adage. But if there are a million ways to build a gaming PC, and a million parts to choose from, which ones matter more than others? And how does Periphio prioritize components when building it’s budget gaming PCs?

There are a lot of things that could be prioritized first depending on your use-case. For example, if you’re editing video, your first priority should be the number of processor cores you have to ensure your render speeds are acceptable and timeline scrubbing is smooth. For streaming, you want to prioritize both the processor and graphics card equally, which is part of what makes systems built for streaming so expensive. But if you’re looking to primarily play games, the most important component in a PC is the graphics card.

The graphics card in a gaming PC is the component that allows you to play graphically intensive games (and no, minesweeper is not included under the “graphically intensive” category). I’m talking about games like Call of Duty: Modern Warfare, Valorant, and Rainbow Six: Siege. Games that take legitimate horsepower to run well. Without a dedicated graphics card installed in your machine, your PC will struggle to load modern games that use 3D graphics and high-definition textures, and may not even launch them at all. For this reason, it is the most important component in a gaming PC, and will typically be the most expensive. Our Periphio systems always prioritize graphics performance over all else, and our Periphio Red system uses a graphics card from the newest generation of Nvidia products, the GTX 1650 SUPER 4GB. The graphics card is also typically the most power-hungry component in a computer, so the next priority in a system is the power supply.

The Power Supply is the heartbeat of any PC. It is what powers the components inside and ensures the reliability and longevity of a system. A low-quality power supply can fail unexpectedly, taking other components with it if the current or voltage it’s supplying to your motherboard, graphics card, or storage drives spikes. Taking this into consideration, a high-quality power supply is always advised whenever building a gaming PC. The premiere way of gauging a power supply’s quality is by looking for an efficiency certification rating called 80 PLUS. 80 PLUS is a third-party power supply efficiency certification program conducted by ENGIE Insight, and any power supply bearing their mark has been tested for quality and reliability.

Every Periphio system uses 80 PLUS certified power supplies of at least 500W to ensure stability, reliability, and future upgradability. In fact, the only reason this is not at the top of our list is that you should know which graphics card you’re going to put in a system before purchasing a power supply. It is the most power-hungry part of almost any system, and thus, the power supply should be powerful enough to power that and any other components you have in your system.

The processor, sometimes referred to as the CPU, is the brain of the computer. I would go as far as to say it IS the computer. Without it, your machine wouldn’t turn out and couldn’t do anything. For a gaming PC, though, it’s not the top priority. Games, especially the well-optimized ones, don’t tax the CPU nearly as much as the graphics card. Typically the lower the frame rates of your games, the lower the stress on the CPU, and that stress scales linearly as your framerate goes up. This is important because it means you need to be sure your pairing of graphics cards and processors doesn’t hit what is called a CPU “bottleneck”, or a point where the video card is waiting on the CPU to serve frames to your screen.

All Periphio systems have been tested to avoid bottlenecks as much as possible, and all systems currently released use Intel quad-core processors to ensure you get the most out of your system’s graphics card.

Memory matters, but not as much as the other components listed above. The minimum amount of memory, also known as RAM, in a well-optimized gaming PC should be 8GB in 2020. Anything less than 6GB may cause issues with game crashes or even launching some heavier titles. Our Periphio Tempest 560 and Blue both have 8GB, and our Red goes above and beyond, packing 16GB of RAM. Our own tests and third-party tests show that at 1080P resolution in most games, going from 8GB to 16GB shows no noticeable difference in average frame rates. This isn’t to say it doesn’t help -- especially if you plan to record gameplay or stream while you play, having extra RAM can ensure you don’t bog down or lag during recording or streaming. But during standard gameplay sessions, the bulk of the stress on memory is put on your graphics card’s dedicated video memory, or VRAM.

Storage, one of the last core components of any PC, is at the bottom of our list, although certainly not any less necessary than the others. Periphio machines all use dual-drive configurations, and all Periphio machines include Solid State Drives, or SSD’s. SSD’s, as opposed to standard spinning Hard Drives, don’t have any physically moving components inside. Because of this, they are up to ten times faster than standard hard drives and help a lot when it comes to boot up times and keeping your system feel snappy and responsive. One con of SSD’s, though, is that they get much more expensive than standard hard drives for larger capacities. This is why Periphio systems all come with standard spinning hard drives as a secondary drive for games and other mass data storage.

There are indeed many ways to build a gaming PC, or any PC for that matter. However, for a gaming PC, the priority will always be the graphics card. This is the most important part of ensuring you have the ability to play the games you want to play. It should almost always be the most expensive component in your system, but make sure you don’t skimp in other areas as well, otherwise, you may hit a severe bottleneck. Ensure you also take into consideration your processor, memory, and storage, and verify you have a high-quality certified power supply so your money doesn’t go up in smoke -- quite literally.

Need an affordable gaming PC?
Periphio offers a full line of gaming PC performance for half the price! 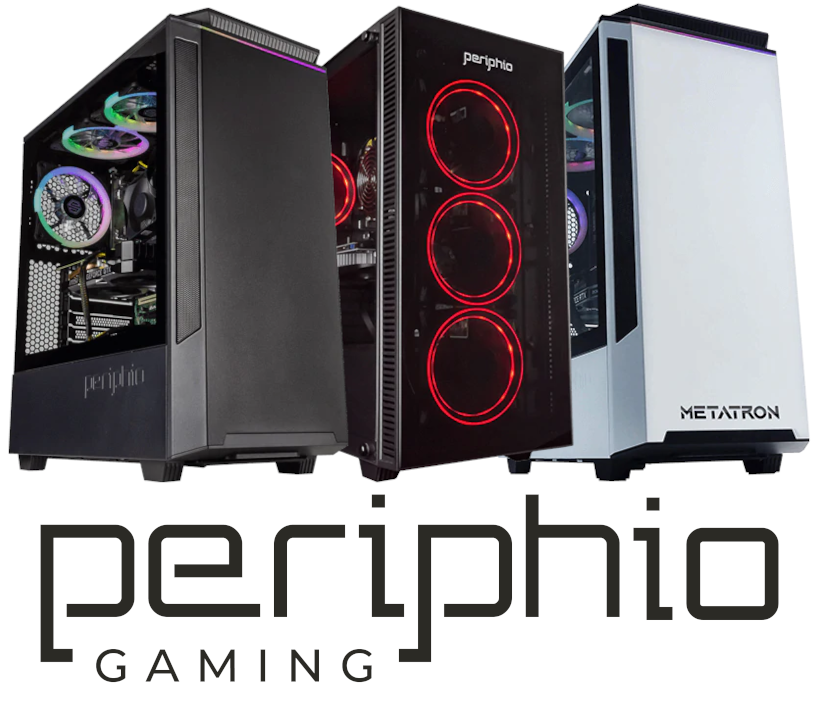 By signing up, you agree to receive promotional emails from PERIPHIO™. You may unsubscribe at any time.